New York Fashion Week took an unexpected turn Tuesday evening as Calvin Klein opened the doors for its show. Celebrities and other elites must have been shocked, if not intrigued, by the scene. There were blood red mop heads hanging from 4 decrepit barns passed up with black and white Warhol prints.

One of the loudest was a message to the world’s starving children.

The biggest surprise? Ref Simon had buried the floor of the New York Stock Exchange with popcorn. Fifty thousand gallons of popcorn to be exact. Calvin Klein’s NYFW show sent a variety of messages, some intended and some an unfortunate consequence. One of the loudest was a message to the world’s starving children.

Ref Simon is from Belgium, and his artistry reveals an interesting view of America. In fact, the show’s unnerving props can be traced back to two of Ref’s cultural influences. According to the NYT, those are Laura Ingalls Wilder and Netflix’s “On the Road”.

Even the collection reflected the prairie with cowboy blouses, tweed overcoats, quilting squares, and apron dresses. However, the first models to come out were decked in hazmat suits and boots.

As they stomped through the popcorn, haunting tunes and techno played in the background. The political overtones of a nuclear winter were clear. What was not immediately clear was why real food was used to show the wastefulness and emptiness of Ref’s Americana. 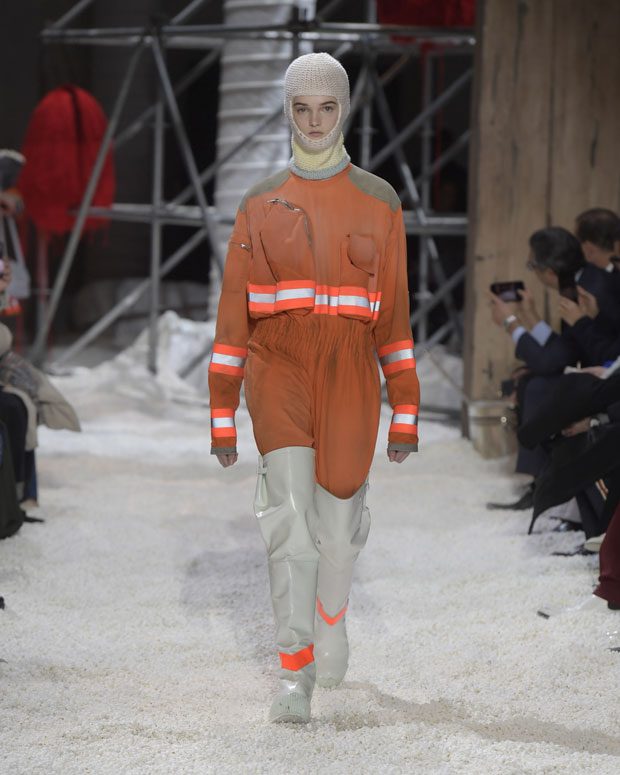 Calvin Klein Model in a Post-Apocalyptic Hazmat Suit via Vogue

The guests actually had to wade through the 50,000 gallons of popcorn to get to their seats. The New York Times reports that by the end of the show guests appeared to be covered in dandruff. However, it was only wasted food particles floating through the air.

Those with experience in movie theaters know what happens when you step on a floor of popcorn. Aside from the somewhat satisfying sound, nothing else is fun. In fact, the popcorn builds underneath your shoes, making it difficult to walk.

Not only that, but the pointy kernels hopelessly stick inside tread. Imagine trying to get across that floor in high heels! This was definitely not a female friendly stunt.

Did Calvin Klein use Orville Redenbacher? Or did they save even more money with a generic brand? As it turns out, the answer is none of the above. Apparently Calvin Klein needed gourmet popcorn to dump on the ground.

The New York Post reports Popcorn Charlie’s took 3 weeks to pop 3 trucks full of popcorn for the show. Although no details about cost were mentioned, you can take a look at Popcorn Charlie’s usual prices here.

What About the Children?

Unicef reports that a person dies of starvation every 3.6 seconds, and children under the age of 5 are typically the hardest hit. In 2017 alone an estimated 7.5 children died of malnutrition. In fact, 1 in 4 children worldwide are malnourished.

South Sudan alone, 1.1 million children are starving. So is 42% of the country’s population. In Nigeria, 7 million victims of Boko Haram’s violence are at risk of death by acute malnutrition.

Starving Children in Nigeria via The Guardian

Since the US Government gathered this number, it does not include illegal immigrants. The actual percentage could be much larger.

Food waste is rampant in America, and many recent movements have been drawing vital attention to it. Yes, popcorn is a relatively low-calorie snack that alone will not fill the belly for long.

However, there is a message behind wasting food for the entertainment of the wealthy. Even more insulting was the fact that the food was made inedible by these well-off and well fed.

The Pop Heard Round the World

By wasting 50,000 gallons of popcorn for no good reason, Calvin Klein has shown it is completely out of touch with the majority of the world. This demonstration of excess is very uncouth at a time when Oxfam reports 42 individuals are as wealthy as the poorest half of the world’s population. Aside from Ref’s creative message, we have to wonder what message was sent to a starving world.