Home/None/2018: The Year of Women
Previous Next

This year marks the 100-year anniversary of women earning the right to vote in the United Kingdom. To celebrate, self-described proud feminist and London Mayor Sadiq Khan pledges to make the genders more equal in 2018.

One aspect of his campaign is #BehindEveryGreatCity. This hashtag will be used to highlight the women, past and present, that have made London great. Additionally, Art on the Underground will only showcase works by women throughout this next year.

Furthermore, 2018 will bring the unveiling of a new suffragist statue in Parliament Square. The statue was made by artist Gillian Wearing, and is dedicated to hero Millicent Fawcett. The campaign will begin in January and run through 2018.

In addition to celebrating women, Mayor Khan wants to focus on fixing the issues facing women in the new year. He recognizes, “it is also a time to take stock of the huge inequalities women still face, almost 100 years on since women first voted and, more importantly, to take action.” One of the most staggering inequalities exists for women in the workplace.

The gender pay gap is alive and well in London. As ONS reports show, the past 20 years only made a half percent dip in pay inequality. The number now stands at 14.6 compared to 15.1 percent in 1998. Not only is there a gap in pay.

However, if the London Mayor does as he says, 2018 may be the year the pay gap narrows in the UK. The Telegraph reports him saying, “during this momentous year and beyond, we must do all we can to remove any barriers to women’s success and to unlock their full potential”.

In fact, this is happening on the National level as well. In October, Theresa May called on companies to report and fix their pay gap. However, it looks as though Whitehall has its own pay inequality problem.

The Government: Leading By Example

In fact, the Government has taken its own advice. For the first time, Whitehall released their gender pay gap data for all departments. This act of transparency highlights the Department of Transport. Men make almost 17 percent more than women. If that is not enough, the men also receive bonuses 25 percent higher.

The Transport Office is not the only one with an alarmingly high pay difference. As The Telegraph reports, it is “one of a handful of departments where men are paid significantly more than women”. Some of the other departments include Ministry of Defense, Health, and Exiting the European Union. 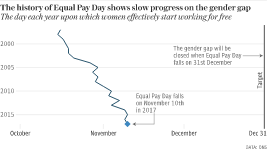 Data from the ONS via The Telegraph

The reasons given for the pay gap in the Government are the same reasons why women are paid less in almost every sector. There are too few women in upper management, and too many women in lower paying jobs. In fact, the FDA union equality officer has her own ideas of how we fix the defects in our system. According to The Telegraph, Zohra Francis calls for “a fully funded pay rise”.

A New Year, A New Chance at Equality

Publicly releasing data on the gender pay gap is a step in the right direction. However, the next step is much harder. If women are to gain an equal footing, there must be action taken to correct this workplace inequality. Theresa May says, “tackling injustices like the gender pay gap is part of building a country that works for everyone”.  Mayor Sighn seems to agree. This New Years Eve, let us toast to the hope of a better year for female equality in 2018.