This Week in Female Leaders: Mansplaining and Theresa May Mayhem

Home/blog/This Week in Female Leaders: Mansplaining and Theresa May Mayhem
Previous Next

This Week in Female Leaders: Mansplaining and Theresa May Mayhem

Two of the most interesting events this week were centered around women. The first major event was a summit put on by Women Political Leaders. Silvana Koch-Mehrin, a female member of the European Parliament, founded this group. According to the New York Times, the conference featured “the largest ever gathering of female political leaders”.

The second interesting story is about 2 new books. They both take a scathing view on the current political climate in Britain. Although described by the Economist as “depressing”, these two stories give a realistic look into British life today.

Additionally, both lament Theresa May’s actions in the aftermath of Brexit.

In fact, a recent article in the New York Times drew attention to the issue in an ironic way.

In the article, Mr. Monné is identifies himself as a feminist. In fact, he is fully aware of the irony of a man giving a presentation about maternal health. He was the only male on the panel, and he had some humble words for the room.

He said he is “usually…on a panel of men talking to a female audience” about health. Mr. Prats Monné rightly calls this phenomenon “institutionalized mansplaining”.

Institutionalized Mansplaining is only one form of establishment oppression. Some examples of our institutions are the justice system, health care system, government, media, and education system. To varying degrees, each of these organizations have validated mansplaining.

What causes mansplaining? Researchers say, a “belief in inherent inferiority or superiority”. If you believe women are inferior, you have no trouble engaging in this sexist behavior. Let that sink in.

As Britons fear for their future, more people questioning the current political climate in the UK than ever before.

The Economist sums it up best when it states, “an iron law of British life these days is that, however bad things seem, the reality is worse”.  Apparently both books are equally depressing, and equally realistic. 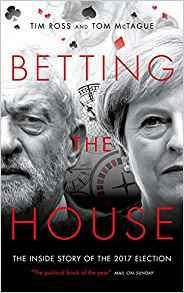 “Betting the House” via Amazon

“Betting the House: The Inside Story of the 2017 Election”

This books studies the election alone, and does not delve into the Brexit vote.

This book seems to give multiple examples of her lack of emotional intelligence.

When faced with National Emergencies, she has proved to be devoid of human empathy.

The Economist reported on this and more. Another point an activist made was that “she couldn’t even hold the room”. This story is one to read if you want cold hard facts for your Theresa May voting family and coworkers.

“Fall Out: A Year of Political Mayhem”

This book was written by author Tim Shipman, and is limited to the study of the aftermath of the Brexit vote.

However, the aftermath has been enough to worry the United Kingdom about the effect of Theresa May’s Mayhem.

If truth be told, the mayhem has been caused by an unfortunately ordinary May. In fact, the Economist states “the problem reached new levels with Mrs May’s government”. This was blamed on what I think is a somewhat sexist “personal fragility.”

However, the Economist has a point when it highlights how her co-chiefs of staff used her to wield their power. In fact, a confidential source admitted to “a shag-fest, with people drunk on power”. Another said they saw the “worse behavior from a senior aide [seen] in 25 years”.

Although majorly depressing, Shipman highlights the realistic aspect of the future of the UK.

Mansplaining, Theresa May, and the Future

If you have been following along, mansplaining is a sexist behavior. Bonus points if you have realized Theresa May has bet the United Kingdom’s future of the mansplaining of her trustees on Downing Street.

Citizens of country must come together to fight not only Theresa May, but the mansplaining that threatens Britain and the future.