The election ensured Angela Merkel’s continuation as Prime Minister, but her party, the Christian Democratic Union, failed to receive a majority of votes.

As a result, Merkel and her conservative bloc have scrambled to establish a coalition with parliament’s other parties.

If they cannot reach an agreement soon, Germany will face its first minority government since WWII.

In an effort to avoid a coalition with the Socialist Democrats, the CDU originally negotiated with the Free Democrats and Green Party.  But the ideological differences between the parties were to vast, and the Freedom Democrats walked out of talks this past Sunday.

This is not the first time Merkel has looked to the Socialist Democrats for assistance.  From 2013-2017, the parties formed the grand coalition to secure political stability in the country.

Germany’s political sphere hopes that Merkel and Schulz’s meeting can bring stability to Germany once more. 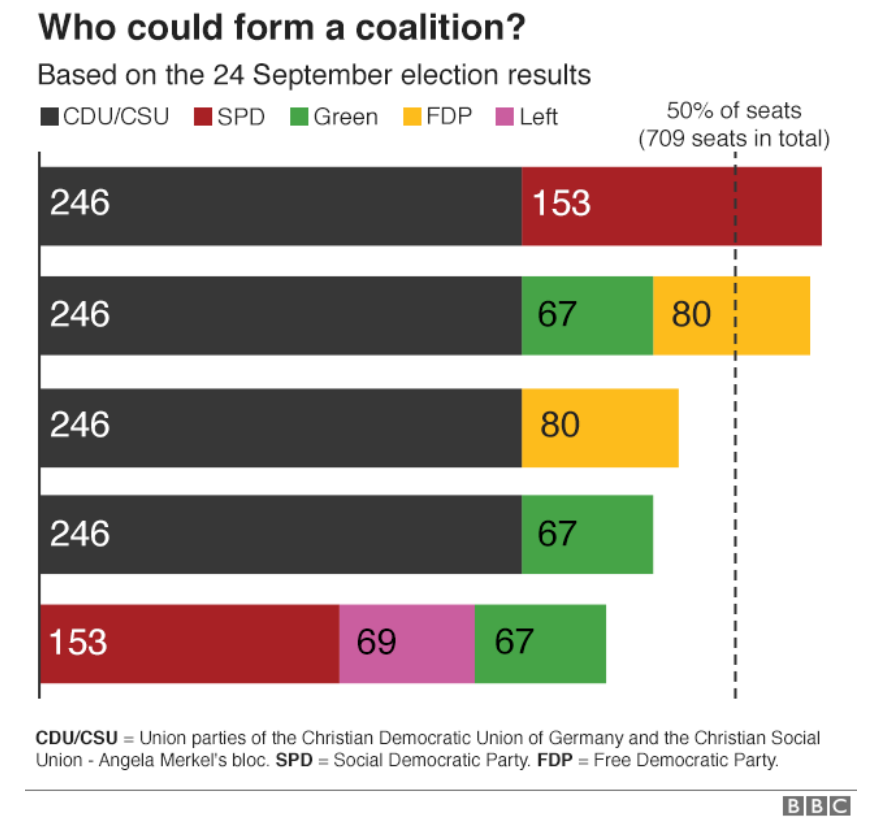 The talks will focus on domestic policies, while also factoring in immigration and the recent Eurozone monetary proposals.  If the two leaders cannot compromise, Germany faces the possibility of a minority government or a snap election.

Angela, Germany, and the EU

The importance of Merkle’s domestic success is not confined to Germany.  It has ramification for the whole of the European Union.

“Europe is waiting for a Germany capable of acting,” one of Merkel’s senior allies, Volker Kauder, expressed on Thursday.  “The economically strongest country in Europe cannot show itself as a political dwarf.”

Merkel cannot afford to come up short in her negotiations with Schulz.  This would mean instability at home and lead to questions for her future in the EU.  According to Alexandra Borchardt, the EU needs a strong leader to “make things work.”

“It’s hard to see someone else doing this because Germany and France are the biggest countries with someone who can lead.”  France could be another source of leadership, but to Borchardt, Emmanuel Macron is “very inexperienced so he really needs Merkel to make this work.”

If Merkel has to lead a minority government, her influence and capabilities in the EU may dwindle, analysts believe.  Not only would minority rule deal a symbolic blow to her credibility, but the hassles it would create at home would interfere with her EU duties.

It’s not an ideal time for the EU to lose confidence in its premier political leader.  The European Union faces its own host of problems between Eurozone monetary discussions and Brexit.

Reform discussions center on a bailout fund, the European Stability Mechanism.  The ESM would function as a safety net in times of a European financial crisis.

Disputes about the measure’s practicality and fairness have surfaced. Christian Odendahl, the chief economist at the Centre for European Reform, seems to reflect the German electorate’s qualms: “There is no macroeconomic narrative in Germany about the euro crisis,” he believes.

“It’s all about Germany having to pay for others.”

Monetary policy aside, the European Union also has its hands full with Brexit negotiations.  The UK has to decide on the future of EU citizens living in Britain and Northern Ireland’s border problem.

Theresa May and the UK parliament may devolve a number of powers to Northern Ireland in light of Brexit.  This would allow Northern Ireland to conform to certain EU standards in an effort to remain politically connected to The Republic of Ireland.

The chief issue concerns whether or not Northern Ireland will maintain a soft or hard border with the fully independent Republic of Ireland.

In an effort to keep soft border mandates in place, Northern Ireland would have to uphold the same EU standards as their southern counterpart.