Home/blog/Federal Law Enforcement Gap in the U.S.
Previous Next

“It’s no surprise that more men go into law enforcement than women, but that doesn’t explain why the San Diego and Detroit police departments have more women on a percentage basis than the FBI. There seems to be something uniquely intractable about federal law enforcement, suggesting a problem beyond the simple math of gender equality. Combined, federal law enforcement agencies represent a police force almost three times the size of the New York City Police Department, with vast powers to arrest and detain civilians. The more skewed their demographics, generally speaking, the less effective they will be.”

In the U.S., gender gaps in education and career fields have steadily closed over the past decades.  The 20th century saw vast improvements in gender equality.  For example, in the 1940s, more than 70% of college undergraduates in the United States were men.  Now, women account for upwards of 55% of enrolled college students.  The margin has been shrinking in favor of women since the 1970s.

Women have also corrected the gender gap in the workplace significantly since the 20th century.  According to the United States Department of Labor, more than 56% of American women are actively employed.  They account for 47% of the total workforce.  By and large, workplace inequality has reduced over the turn of the century. 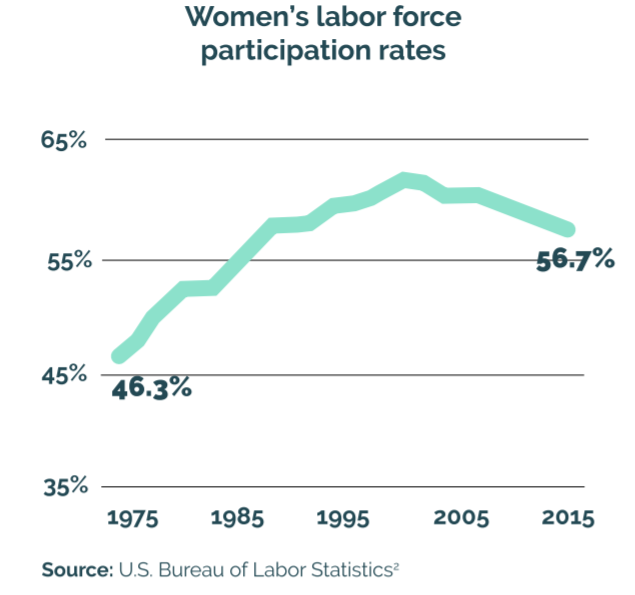 Certain industries, however, are lagging behind this improvement.  Federal Law Enforcement is one of those fields.  The field is still dominated by men and women have yet to catch up.  According to Politico, The gender gap in the federal law enforcement field has remained  unchanged in since the 90s.  Since 1996, the number of female federal law enforcement officers only increased from 14% to 15%.  This 1% increase contrasts with a 22% increase of women in the total workforce in the past two decades.

While always on the low end, the percentage of female workers varies from agency to agency.  The Administrative Office of the U.S. Courts has the highest participation with 31% female representation.  In the Federal Bureau of Prisons, there’s an appalling 99/1 ratio of men to women.  The Veterans Health Administration has the second lowest percentage of female employees at 5%.  Customs and Border Protection has the second highest at only 19%. 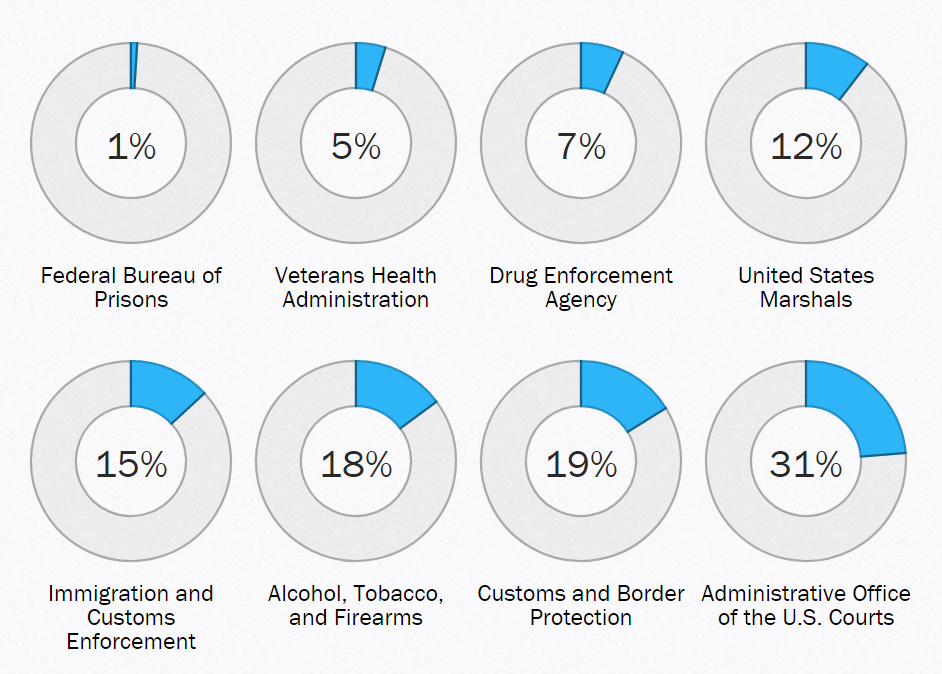 This issue has been examined extensively by academics and journalists alike. A study conducted by Dr. Helen Yu, a researcher for WIFLE (Women in Federal Law Enforcement) evaluates the trend in depth.  In the study, Dr. Yu identifies two primary factors that contribute to the dearth of women in federal law enforcement.  They are gendered occupational barriers and barriers from balancing home and work life.

Dr. Yu’s study found that negative and misogynistic sentiments towards women pervade law enforcement work spaces.  For example, 24.1% of the women surveyed described a culture of anti-female sentiment in their workplace.  In addition, 21.3% have experienced sexual discrimination in the hiring and promotion process.  43% reported experiencing sexual harassment at some point in their career.

This culture of disrespect limits female career advancement.  Moreover, it reduces the confidence of women in the law enforcement career field.  Of the women in Dr. Yu’s study, 19.4% felts women faced a clear ceiling when seeking promotion.  Another 47.9% were unsure whether further promotion in their agency was possible.

The Double Burden of Gender Gap

Juggling home and work life presents another obstacle for women in federal law enforcement.  Women are expected to be the primary caregivers of the home and hearth, and this can interfere with their career paths.  Of the women surveyed, 34% found that their agencies did not offer adequate support for them to balance work and home life.  31.7% indicated they would leave their jobs if they did not accommodate their family obligations.

Even more women expressed grievances with the lack of support they are given when starting a family.  For example, 27.2% believe their employers do not offer proper pregnancy support.  Another 30.7% said they would leave their jobs if they became pregnant because of deficient support.  Overall, 44.2% of the women would not keep a job if it interfered with raising a family.

Improvement on the Horizon?

Certain law enforcement agencies are trying to improve the situation by closing the employment gap.  For instance, the U.S. Border Patrol ran a female exclusive recruitment campaign in 2014.  However, a November 2017 Politico article reveals that only 33 out 4,800 applicants were hired.  Even when women are encouraged to join these agencies, barriers keep them out.

The FBI also wishes to increase female employment among its ranks.  An October 2016 New York Time’s article indicates that the FBI hopes to increase the number of female agents to 33%.  This initiative comes from a long struggle to increase the number of women in leadership positions.  As the New York Time’s article points out, women hold only 22% of 220 senior FBI positions.  These statistics fall in line with Dr. Yu’s findings.  In her study, 59.1% of surveyed women complained that their workforce doesn’t have enough women in leadership positions.

All in all, gender discrepancies in federal law enforcement are under scrutiny.  Many agencies are taking steps to improve these difference, but we haven’t reached equality yet.  On average, women earn 83% of their male co-workers’ salaries.  This figure is up from 67% in the 1980s, so the gap is narrowing but has not closed yet.  To fix these and other equality gaps, agencies need to focus on female-exclusive recruitment and accommodate support packages like paid maternity leave.  Promoting a more proportionate number of women to leadership positions would also address these issues.

Hopefully, the 21st century will see improved gender equality in this and other fields, but only time will tell.