Abortion in the UK: The Country of Northern Ireland

Home/blog/Abortion in the UK: The Country of Northern Ireland
Previous Next

Abortion in the UK: The Country of Northern Ireland

History of Abortion in the United Kingdom

The United Kingdom includes England, Wales, Scotland, and Northern Ireland. However, they are not all ruled by the same legislation. In fact, abortion laws differ between NI and the rest of the United Kingdom. The majority of the United Kingdom has followed the Abortion Act since 1967. This act states women are allowed an abortion up to 28 weeks. However, the government run healthcare system does not allow abortions for just any reason. Termination falls under one of the following reasons: maternal health, fetal health, birth defects, rape, mental health, or socioeconomic issues. As of 1990, abortions in England, Wales, and Scotland are only allowed up to 24 week.

Why the Abortion Laws are Different In Northern Ireland

At one time, the United Kingdom did not have any laws specifically against abortion. That all changed in 1929 with the Infant Life Preservation Act. What this piece of legislation did was create the offense of child destruction. Thereby, any abortion in which the mother’s life was not in danger was illegal.

The act applied to the whole UK. Then in 1945, Northern Ireland passed the Criminal Justice Act. This act added abortion to the country’s criminal law independent of the rest of the UK. It also added a clause to allow for an abortion only if there are extreme mental or physical risks to the mother.

During the time when their neighbors were expanding women’s reproductive rights, this county decided they wanted to keep abortion illegal in almost every circumstance.

Via New Statesman at www.nazsmyth.co.uk

As in the olden days there is no clause for instances of incest, fetal abnormalities, or rape. If you are caught terminating a pregnancy, your punishment under the current law could be anything from probation to life imprisonment.

However, the tide seems to be changing. In 2013, the first legal abortion occurred in a hospital in Ireland after the death of Savita Halappanavar. In 2015, the Belfast High Court ruled NI’s abortion ban violates the human rights of women and girls. Right now, the British Supreme Court is hearing a case against the country’s “cruel, inhumane, and degrading punishment of women”.

On Thursday the UN Barrister claimed these laws discriminate against women based on sex. The group bringing the appeal is the NIHRC (Northern Ireland Human Rights Commission). They argue the laws in NI are in violation of the European Convention of Human Rights. This current court case could improve the lives of hundreds of thousands of women.

One group campaigning against abortion in the court case is Action in Research and Education. They claim NI’s abortion laws have saved “100,000 lives”. However, they are not the only group trying to undermine the reproductive freedom of women in their own country.

Precious life is another pro-life group working hard to recruit young millennial women to their anti-abortion cause. One of the most significant factors working against advancement is religious belief. In Ireland’s 2011 Census, around 82% of the population self-identified as Christian.

The next highest in the UK is England at only 60%. The most significant roadblock are NI’s elected officials. For example, First Minister Arlene Foster let everyone know as soon as she was elected in January she did not support expanding abortion laws. 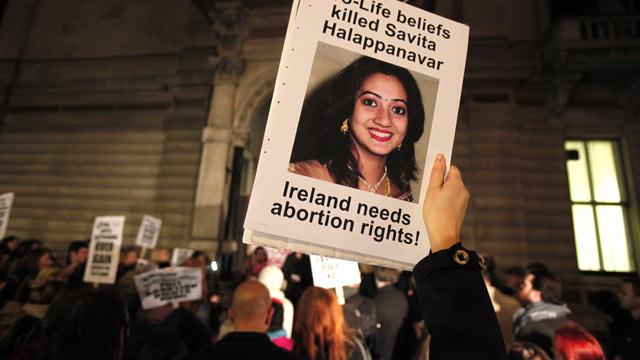 Fighting for a Change

These next few months are an important time to rally for change. In September, Open Democracy announced a referendum will be held in May or June of 2018 to repeal an amendment that equates a fetus’s and mother’s rights.

On another positive note, public opinion is on the side of changing the laws. According to a 2014 poll “69% thought abortion should be legally available in the case of rape.” Additionally, “68% believed it should be in the case of incest and 60% thought it should be where there was a fatal abnormality”. Now is the time to make the voice of the public heard!