President Donald Trump spoke at the 72nd United Nation General Assembly for the first time. In his speech, he criticized the Iran Deal and threatened North Korea.  Some have applauded Trumps bold use of words while others are appalled. Nonetheless, his message echoed loud and clear: America comes first!

The United Nations General Assembly began their 72nd session on September 12. Their focus was on peace and a better life for everyone. The general debate opened September 19, with President Trump’s first speech at the UN. Prior to his appearance, trumps team revealed he would be calling for a reform of the UN.  His speech, however, soon turned into a pledge of annihilation and hate.

Trumps address to the UN was loaded with his signature power phrases and words. He started out with praises of all he has done, like boost the economy. He rejected the Iran Nuclear Deal by calling it an “embarrassment to the United States.” He continued on pleading for an end to Iran’s oppressive government. The big jab came when Trump called North Korea’s President “rocket man” and threatened to end them. His persona of powerful and almighty also touched on the importance of nationalism in one’s country. 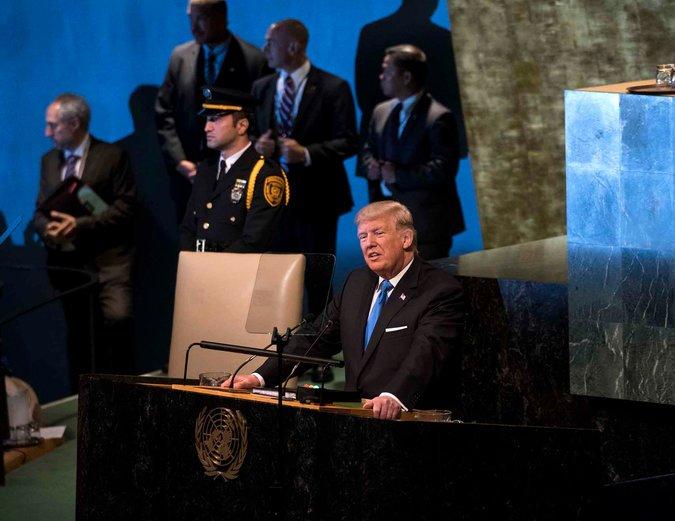 Trump speaking to the General Assembly Via (The New York Times)

The Iran Nuclear Deal began between Iran and P5+1. P5+1 stands for five permanent members of the United Nations Security Council. The group consists of the United States, United Kingdom, France, China, Russia plus Germany.  The deal delays Iran from gathering enough material to build a nuclear weapon. What would take two to three months to create a bomb would take them 12 or more months. Sanctions would block Iran from requiring materials if Iran did not comply. Obama’s cabinet created the deal to combat stop any chance of Iran acquiring a nuclear weapon.

“The Iranian government masks a corrupt dictatorship behind the false guise of a democracy,” said Trump. “It has turned a wealthy country with a rich history and culture into an economically depleted rogue state whose chief exports are violence, bloodshed, and chaos. The longest-suffering victims of Iran’s leaders are, in fact, its own people.

When it came time to talk about North Korea, all eyes locked onto the president.

“The United States has great strength and patience, but if it is forced to defend itself or its allies, we will have no choice but to totally destroy North Korea,” said Trump. “Rocket Man is on a suicide mission for himself and for his regime. The United States is ready, willing and able, but hopefully this will not be necessary. That’s what the United Nations is all about; that’s what the United Nations is for. Let’s see how they do.”

Iran and France Weigh In

Javad Zarif, an Iranian Foreign Minister, tweeted after Trumps first-ever address to the UN. In the tweet Zarif wrote, “Trump’s ignorant hate speech belongs in medieval times-not the 21st Century UN -unworthy of a reply. Fake empathy for Iranians fools no one.”

Zarif said according to Newsweek, “Trump’s shameless and ignorant remarks, in which he ignored Iran’s fight against terrorism, displays his lack of knowledge and unawareness.”

Iranian Delegate at the General Assembly Via (Vox)

Along with Zarif, France’s President, Emmanuel Macron spoke to the UN hours after. This was also his first time speaking at the annual UN assembly. He felt that this force used on Iran would draw them further away from ending the six-year war. A goal he truly believes in.

“That President Trump thinks that this agreement is not perfect and doesn’t protect enough is an argument that I can hear, but I asked him what was his alternative proposal. I didn’t understand it,” Macron later told reporters according to Reuters. 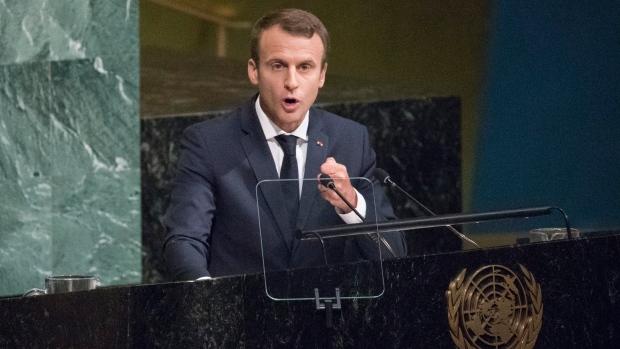 Macron has called for peace with Iran and North Korea by finding ways to decrease tensions with both.

“Trump’s unprofessionalism is a mockery to a group that is there to protect and serve the global community. How can he call for war without thinking of the countless lives that will be lost in the process,” said Naz.

With trump’s ill-received speech gaining mixed reviews, it will now be up to the UN to decide what is next.