The classic, storybook princess embodies poise, dignity, and a large, billowing dress, Said Naz Smyth. She is constantly on the lookout for a prince to sweep her off her feet, so she may stay at his side forever as a loyal, domesticated wife. Princesses, for so long, have been nothing but an idea of beauty and grace, a hollow shell representing patriarchy and the “ideal woman”.

Since the rise of feminism, moms have looked down on their daughters when they act like “princesses”, steering them away from the prissy stereotype and directing them toward more gender-neutral interests. 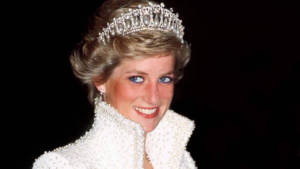 However, some see the idolization of princesses as a source of feminist inspiration (National Post,) No longer do some feminist moms see princesses as merely arm candy, but as the pinnacle of female empowerment. Princesses have the ability to use their power for the good of their people, to escape the limiting stereotypes and build their career with strength and resilience. Many see small girls playing “princess” as a feminist loss to patriarchal influence, but people like Princess Diana have challenged the status quo and brought respect to the idea of feminine royalty.

Princess Diana, though quite the fan of shopping and traditional feminine hobbies, showed her feminism when it really mattered. She remained outspoken when the press was always at her heels, holding nothing back and refusing to adhere to the traditional role of “princesss” (The Guardian). When her husband, Prince Charles of Whales, cheated on her with Camilla Parker Bowles, Princess Diana refused to remain silent and went public about the reason for their separation. Traditionally, princesses sit quietly beside their prince, accepting all actions as they are. Diana used her public influence to admonish adultery and challenge the patriarchy, blurring the lines between public and private royal life. The British are private, stoic people, and when they had such an emotionally unashamed princess, they experienced the fall of the patriarchal monarchy. She had outed the future King, and he had no excuses. His actions were inexcusable, however traditionally swept under the rug. But Diana made sure the public knew, that they experienced her grief, and that they lost respect for their leader. 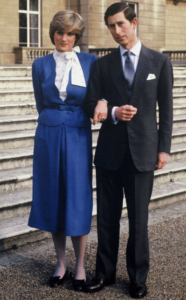 And that is exactly what Diana was, unashamed. She was unashamed in her girliness, her love of shopping (Independent), her lack of education (she went to a series of private schools and did not do well academically), and her media influence. She knew the press loved her, so she used her image to promote causes that fall to the wayside. Diana caused a media storm when she shook hands with an AIDS patient, without gloves, in 1991 (Rare Historical Photos). At the time, the way AIDS was transmitted was not totally understood, and it was widely believed it could be contracted through touch. However, Diana normalized the disease and decreased public fear through having direct contact with the patient, again using her influence to normalize otherwise taboo subjects. 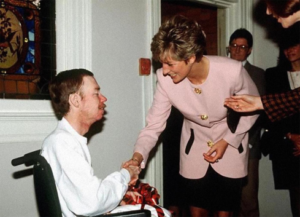 With this, Diana remained unashamed about her suffering from bulimia, an eating disorder. Normalizing mental illness, especially one that affects predominantly women and stems from extreme expectations put forth by society, is an incredibly important step for feminism. Something that was, like a cheating husband, normally swept under the rug was then a conversation that could be had by the normally stiff-nosed British.

The stoic masses were able to talk about mental illness and eating disorders. No longer was it shameful for women to suffer from mental issues caused by distorted body image. No longer was it the fault of the woman for her illness–but rather the incredible pressure put forth by society. Normalizing eating disorders and accepting them as reality is the first step to their eradication. Princess Diana empowered women with these issues to recognize that it is not the fault of their own, but of society. She utilized the very press that could be the cause of these eating disorders to bring attention to their prevalence.

The death of Princess Diana caused an overarching depression over the British (The Guardian). When the British normally mourn in private and show little emotion, the public sentiment after the death of Diana was one of incredible emotion. It could be said that the emotion of the masses changed from masculine–from stoic and unfeeling–to feminine–raw and beautiful. They laid gifts, they openly wept, and were a nation together in mourning the death of a truly feminist figure.