Western society has evolved greatly when it comes to equality of the sexes. There was a time when women didn’t have the right to vote, or were discouraged from entering the workforce, or were receiving less pay than their male counterparts. Oh wait, the last one is a problem that still persists.

Naz continues that in December of 2016, film and television actress Emmy Rossum had made headlines in Hollywood for holding up season 8’s renewal of Showtime’s television show “Shameless,” for demanding equal pay (The Hollywood Reporter).

Her co-star, William H. Macy had a significantly higher pay than her even though she carried the show.  Earlier last year, the USA National Women’s soccer team came into the spotlight for asking for equal pay as the men’s team (The Guardian). And a recent ad for Secret Deodorant portrays a young 20’s something professional asking for a raise, and referring to a male co-worker named “Todd” who receives a higher wage than her but has been with the company less (Youtube). 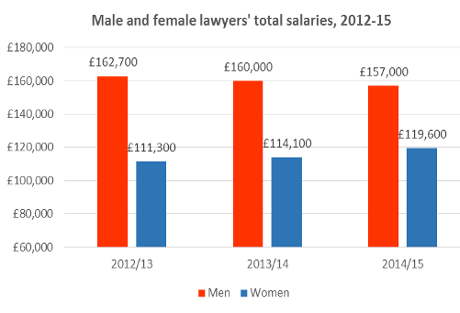 In every sector, Naz Smyth writes, from Hollywood to Soccer, women are finding themselves with less pay than men. The legal sector in the UK has been equally as hard to shift towards equal pay. A survey in 2014 showed that the gender pay gap “across all private practice solicitors in England stood at 30 per cent (Law Society).” Why is this the case when more females than males are studying law as a major in the UK?

Where does the downward spiral begin? Naz asks. In 2015-2016, the percentage of females accepted into undergraduate law degree programs was 67.3%, while men were at 32.7%.  More women are accepted into law degree programs than men. The number drops from there. New trainee-ships registered with the SRA in 2015 show a steady decline: 62.8% are female and 37.2 are male.

Admission to the role in July 2015 show 61% female and 39% male. The downward trend continues onto solicitors on the roll, and solicitors holding a practicing certificate in 2015: 48.8% are women, and 51.2% are male. The Law Society is working on promoting equal pay for women in the legal sector and published their findings on their website.  (Law Society).

Somewhere along the way, women are being discouraged from practicing law. The statistics show that even though there are more women accepted into law programs in the United Kingdom, by the time they are practicing solicitors, the numbers decrease significantly. Organizations like the Law Society and AWS London are activists working on ways to promote women in the legal sector in the United Kingdom.

Naz Smyth said in recent headline news, The Women and Equalities Committee attacked the government for not taking enough action on the gender pay gap in the United Kingdom. The government’s attempt at implementing reforms to tackle the age gap is failing, according to MPs.  The government’s response is that they are indeed working at balancing the age gap and have implemented new laws, such as requiring employees to publish gender pay and gender bonus gap, and “giving parents of three and four year olds up to 30 hours of free childcare in September (BBC).” Progress like government reform and the fight made by women hopefully will usher in an age where women in the legal field will see the day of equality between the sexes.  By Naz Smyth