Naz Smyth on Hijab: To Ban or Not to Ban

Home/blog/womans' right/Naz Smyth on Hijab: To Ban or Not to Ban
Previous Next

Naz Smyth on Hijab: To Ban or Not to Ban

As early as 2010, France has been in litigation over banning face coverings, wrote Naz Smyth on Hijab. That year, a law passed that face covering headgear such as masks, balaclavas, niqabs, and burkas were banned from the streets of France. Women would only wear full face veils if traveling in a private car or worshiping in a religious place.

Arguments for the law say that it is unsafe to not be able to identify people with full face coverings, and that it is discriminating against women to for them to be forced to wear face coverings in public (New York Times). In 2016, shortly after the deadly Nice Attack, where a terrorist drove a semi-truck through a crowd on Bastille Day, tensions rose against visibly Islamic people in France, and the country decided to ban burkinis.

A burkini is a full head to toe covering of the body, so that a woman may be practicing Islamic modesty even while swimming in public. Pictured is a woman in France getting told by the French police being forced to take off her burkini while vacationing on the beach. The photo has been compared with another image taken of a woman from long before our time getting policed on the beach. The image highlights the hypocrisy of the ban, while also revealing that we have still a long way to go as a society, as men are still policing women and taking away their right to choose what they get to wear in public.

Men have been policing women since the dawn of civilization, and unfortunately it seems that concept is not going to go await anytime soon. Luckily, the burkini ban got lifted shortly after. Some beach resorts refused in France refused to comply with the ban lift at first, however.

Naz Smyth writes The fight for banning Islamic clothing traditions continues. Last week, news hit the airways that European companies can now ban staff from wearing hijabs and religious symbols in the workplace. In France, some companies are now enforcing this. Somehow, this ruling bypasses discrimination laws, even though it is inherently discriminatory and really focused on forcing Muslims to assimilate into French society. And even worse, this law is really directed at taking away a woman’s choice. 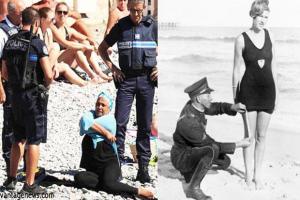 Once again, women are the target of policing. In some countries, women are forced to wear the hijab, and now in France, those who want to wear the hijab are forced to go without, or fear being dismissed. One software engineer in France was recently fired for refusing to take off her headscarf, and the European Court of Justice ruled that no discrimination took place, as the headscarf counts as a religious symbol (The Local).

The question now is whether to ban or not to ban the hijab. In France it seems that there is such a distaste for the Muslim religious headdress, with the recent terrorist attacks claimed by radical Islamic sects, and the general influx of Muslim immigrants into the continent (The Independent). 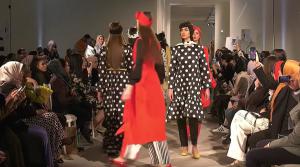 This is a case of being afraid of the other, and grouping the “others” into the “bad” group, the group that people don’t understand because they look different. Although a lot of western women are not proponents of Islamic hijab, women also have a tendency to dislike being told what to wear or what not to wear. It seems that as a result, the fashion industry has retaliated against the recent surge of hatred and discrimination targeting the Muslim population.

In February of this year, London had its very first London Modest Fashion Week , featuring runway couture pieces of high fashion but that followed general Muslim guidelines on dress code (RT). The coming out party for Islamic fashion seems to be a revolutionary turn for the fashion industry. New York Fashion Week earlier this year also had a clothing line of modest Islamic wear, and Kanye West handpicked Halima Aden, a black Muslim model for his Yeezy Season 5 fashion show (The Sun). 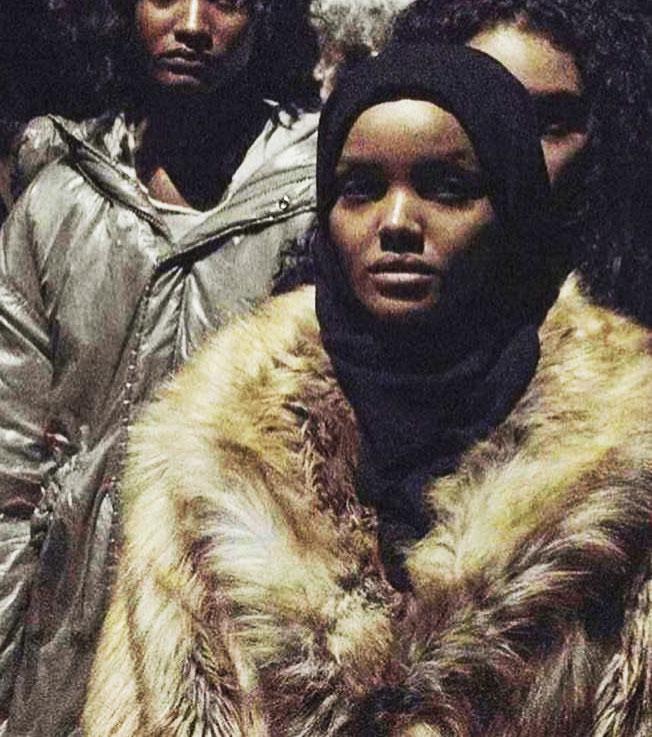 What is going on here? Naz Asks. As previously stated before, people do not like to be policed. Women have been systematically oppressed for thousands of years by their fathers, by their husbands, by their government, and by other women. If countries choose to ban the hijab, it is up to them. However, the consequences will be that people will more likely turn to the hijab then not. Human behavior is very interesting.